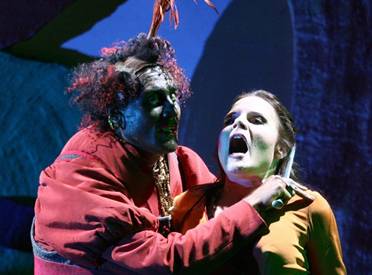 Scene from the opera "The Magic Flute" - Monostatos is
threatening Pamina, the woman he holds captive and loves
at the same time.

Heinrich is an opera singer - a tenor to be exact. He didn’t really have any complaints but after a heart murmur and a right bundle branch block were detected at a visit to his doctor, he thought it was time to see a cardiologist.

On stage
Heinrich entered the office as if he were on stage. On several occasions he would answer my questions by quoting lyrics from famous operas. As I performed the echo exam he cheerfully sang the “Monostatos Aria” from Mozart's Magic Flute. Here is the verse in which Monstatos proclaims his “feelings for Pamina”:
“Ist mir denn kein Herz gegeben bin ich nicht aus Fleisch und Blut” (don´t I have a heart, am I not made of flesh and blood?)
This accompanied by attempts to obtain a good four-chamber view. His pitch only dropped when I confronted him with the diagnosis. But first let us take a step back: after all he did have a history of heart disease. As a child he had undergone surgery for a congenital defect. He didn't know what defect it had been - merely that “two holes” had been closed. Nevertheless, except for occasional ectopic beats he was completely asymptomatic.

The echocardiogram
Now let us turn to the echo and unravel the mystery:

His right heart is obviously very severely dilated. Could this be in some way connected with the "two holes" that were closed?

Obviously, one would look for an ASD and or a VSD. But there simply was no defect here. The basal septum does look a bit awkward. I suspected a patch. So maybe a VSD had really been closed.

The only other finding is moderate aortic regurgitation. This could explain the murmur, but not the enlarged right heart.

Parasternal short-axis view at the level of the ventricles.

Abnormal septal motion - but why?
Look at the motion of the septum here. Remember all the cases I presented on right heart disease and how the timing of interventricular flattening can help to differentiate between volume and pressure overload?

Tractor vs. Motorcycle
The Ignorant
The Pretender
Three Stories one Plot
Icing on the cake
Missed Chance

In this case flattening occurs during diastole. This would fit well with volume overload (as an aside: the patient also had normal pulmonary pressure), but there is no tricuspid regurgitation and no atrial septal defect that would explain volume overload. Do you have any other suggestion as to what the cause of volume overload could be? The next loop will give you the answer:

Short-axis view at the base with color Doppler.

It seems as if there is only rudimentary tissue left, and practically no pulmonary valve. No wonder pulmonary regurgitation is present.

What had happened?
Without old medical records it is difficult to tell what the initial problem was. But I would suspect he had Tetrology of Fallot, which is marked by a VSD, pulmonary stenosis, right ventricular hypertrophy (which is basically a consequence of pulmonary stenosis), and overriding of the aorta - which means that the aorta is located more in the midline between the right and the left ventricular septum, overriding the VSD and thus receiving its blood directly from the poorly oxygenated right ventricle. Maybe even Pentalogy of Fallot if an additional atrial septal defect was present. The VSD (and ASD) had been closed. Note the awkward position of the aorta in relation to the basal septum, which is a remnant of the overriding aorta. Surgery in the pulmonary valve must have resulted in severe pulmonary regurgitation. Only strange that he tolerated the condition for so long.


The next step
The only solution to the problem is pulmonary valve replacement. Unfortunately, interventional implantation of a valve (a “Melody” valve) will not be possible because his pulmonary root is too large. As the patient is asymptomatic and his right ventricular function is still normal, we will defer surgery for now. We will perform additional tests to get a better view of his right ventricle (magnetic resonance imaging), and an exercise test to see whether he truly is asymptomatic. Sooner or later, however, Monostatos will need surgery. A major being the volume index of the right ventricle and the width of the right bundle branch block. After all he has a heart. It just needs a bit of fixing.