Will this be the shortest case report you ever read?

A 22 year old drug addict with hepatitis C presents with, fever, multiple pulmonary infiltrates and a systolic murmur. What is your first thought? Tricuspid endocarditis right?

We all know these three things:

Most of you probably made the correct diagnosis based on the key clinical findings. The patient MUST have right-sided endocarditis. Echocardiography will only confirm the suspicion.

We could stop here and this would be the shortest case report you ever read.

But there are more key messages hidden in this case. Let us take a closer look at the echo  and see what happened to the patient...

Clearly, there are vegetations on the tricuspid valve. The valve is also destructed and the right ventricle shows evidence of volume overload (dilated and hyperdynamic).

As expected, there is at least moderate tricuspid regurgitation. At this point we decided to treat the patient with antibiotics (we soon had a positive blood culture of S. aureus). Actually, he was starting to respond and his CRP levels dropped. But strangely, he had a relapse soon thereafter. At that time we performed the following echocardiogram (click on images to see videos):

Not only were the vegetations still there but they were actually growing! There was even more destruction of the tricuspid valve.

Only  several days later did we realize what the reason was: his visiting "friends" were supplying our patient with narcotic drugs in the hospital! Pretty convenient too, since he had an intravenous line.

We had a long discussion with the patient and relatives. We  consulted our surgeons, psychiatrists and psychotherapists and finally came to the conclusion: we had to give him the chance of tricuspid valve surgery. After all he was young, and was willing to initiate withdrawal treatment.

Surgery actually went fine, he recovered quickly and left the hospital 3 weeks later with a bioprosthetic tricuspid valve (repair was not feasible).

Four months later we saw him again. His condition was poor. He was on a maintenance anti-addiction program with methadone. The only problem was: he was not swallowing but injecting the drug. Again he had fever and significantly elevated CRP levels. We recorded the following echo (click on images to see videos):


Clearly, vegetations are now on the prosthetic valve. An unfavorable condition with a rather poor prognosis.  Especially since we found S. aureus infection in the blood culture again. So what should we do now? Just antibiotics? Or should we give him a second chance and perform repeat tricuspid valve replacement?

At this point we simply felt that we should wait and see if antibiotics alone can solve the problem. Two weeks later we checked on the valve again (click on images to see videos)..

Clearly endocarditis had worsened. The vegetation on the prosthesis was huge. Also note that right ventricular function has now reduced. 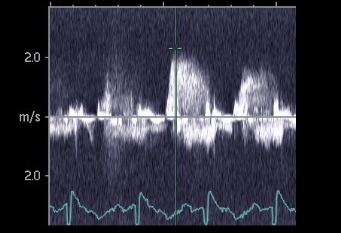 The tricuspid valve inflow velocity was elevated and the mean gradient was 9mmHg, much too high and indicative of prosthetic valve obstruction caused by the vegetations. Tricuspid regurgitation was mild.

We are still struggling with a decision how to proceed. The last echo is only one week old. Beyond doubt his prognosis is poor. But could repeat surgery change his course? Will he be able to keep away from drugs?

This is probably the key issue to consider in all patients with tricuspid valve endocarditis. Still, we believe everyone should get at least one chance.

If you want to learn more about endocarditis.....

just visit us at 123sonography.com and check out our courses. We offer very targeted cases and lectures that will teach you everything you need to know about this important disease.