The Story
A 70-year-old former dentist presented with shortness of breath. Her situation had been worsening over the last couple of years, Several pulmonary function tests were performed previously. They showed “mild obstructive pulmonary disease”. However, this finding could hardly explain her symptoms, which were now rather severe (NYHA class III). So finally she ended up getting an echocardiogram.

The Echo
Take a look at the images first, and see if you can depict the key findings: 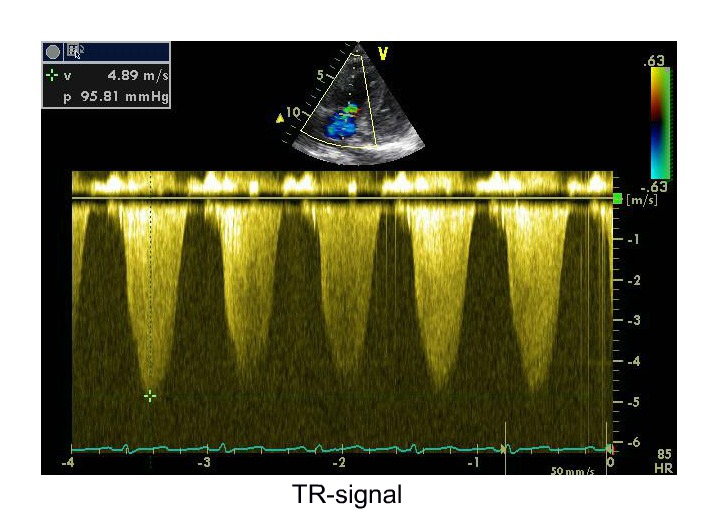 The echo showed a prominent, dilated and hypertrophic right ventricle and an enlarged right atrium. Short axis views revealed a  “D-shaped” left ventricle. A small pericardial effusion was also present. Tricuspid regurgitation was moderate, which made it easier to estimate the right ventricular pressure.

Most of you probably made the diagnosis of severe pulmonary hypertension, simply based on the 2D image with all the typical findings described above. But there is more information hidden in these images. First, the left ventricle not only has a D shape (septal flattening) in systole but also during diastole, this is also indicative of right ventricular volume overload. Truly, the patient has tricuspid regurgitation.

What other findings to expect:
But let us look at some more images of this patient and see if we can find any additional findings: 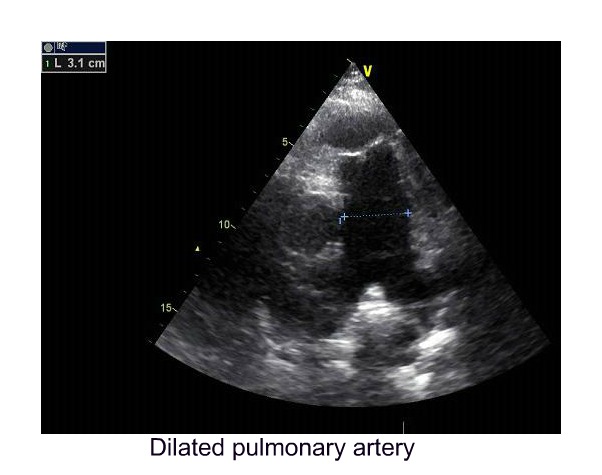 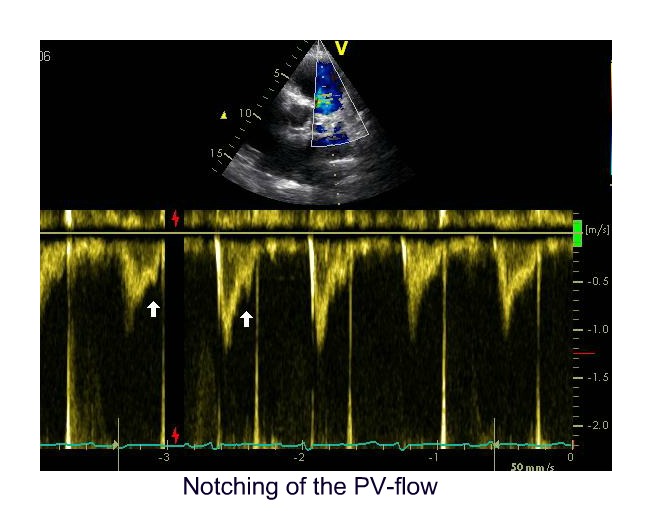 Note that the pulmonary artery is dilated. This too is a consequence of the elevated pulmonary pressure. In addition, the pulmonic flow signal shows a pointed appearance with an early peak (short acceleration time) as well as a systolic notch reflecting elevated pulmonary vascular resistance. Why is this important? Simply, because these findings can give you a rough estimate of pulmonary pressure if tricuspid regurgitation is absent or the signal is too weak.

Tricks to measure TR velocity
Here are some other tricks you can use to measure the velocity of the TR signal:

But what now?
Back to our patient, we don’t have the diagnosis yet. All we know is that her pulmonary artery pressure is very high. But what is the cause? It certainly is not left heart disease. This is for sure. There are no other abnormalities (e.g., reduced left ventricular function or valve disease) that could explain such severe pulmonary hypertension. In addition, no VSD or ASD were present.
So now it was time to look at other imaging modalities. To make things short we found multiple thrombi in both pulmonary arteries, which led to the diagnosis of chronic thromboembolic pulmonary hypertension (CTEPH).

A happy ending
This was actually good news to the patient since it gave here a highly effective therapeutic option. Not only was the patient put on warfarin but she also had a surgical procedure called thrombectomy. Masses of old and fresh thrombi were pealed out of the pulmonary arteries during surgery. This ultimately led to near normalization of pulmonary arterial pressure.

Recommended articles:
The Cloud Forest of Echocardiography
A Conference And A Case