Common feeling or what?

When young people enter your echo lab you never know whether you should be happy ("This exam will be really fast and easy, no pathologies for sure, I can relax, maybe order a nice cup of coffee!") or anxious ("Hm, if this guy is here, he has something for sure, maybe well hidden, and I am the guy who's supposed to establish the correct diagnosis.") Am I right? That was my feeling when I saw John entering my echo lab. Eighteen years old, taller than me, trained muscles all over his body. I must confess my first thought was "What the hell is he here for?". I started asking him about his history and this is what he told me: he does not smoke, he loves sports, he dreams of becoming a famous baseball player, and I am the first doctor he ever met since the day he was born.

In the last three weeks he had been feeling weaker. He was accustomed to playing baseball nearly 3 hours/day, 6 days/week, but, after a bout of fever 2 weeks earlier, he could only practice for 1 hour per day.

Let’s see if his echo findings are normal. 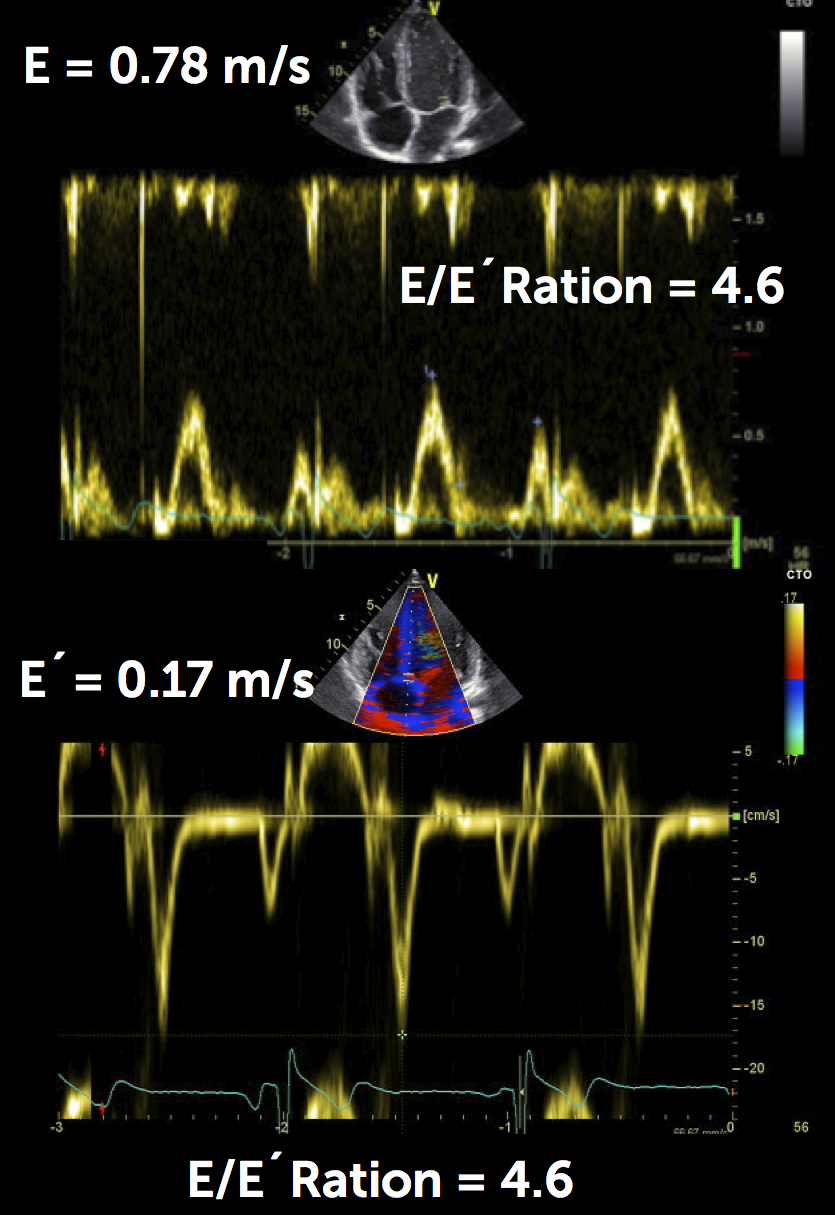 What about LV systolic function? John’s ventricle looked a little enlarged (his indexed LV end-diastolic volume was 79 ml/mq) and his LV ejection fraction (EF) was only 54%.

It’s up to you

Now imagine you are in front of John, looking into his worried eyes: would you pat his back and send him back to the baseball field because his heart is absolutely normal or would you rather advise him to stop training and destroy his dream of becoming the best baseball player on earth?

Trying to give him the right advice

To solve the problem, we decided to make John exercise and see what happened to his heart during strain. As we could not bring the baseball field into our lab, we asked him to perform a hand grip maneuver and gave him a small elastic ball to squeeze as hard as he could with both hands.

Now look at his apical four- and two-chamber views on exercise (right side) compared to the same views at rest (left side).

Four-chamber view at rest (left) and during exercise (right).

Exercise: useful or essential for diagnosis?

Although his LVEF was 54% at rest, his function increased significantly after the hand grip. Do you see how small the LV is at end-systole on exertion? His LVEF increased to 75%! But even more significant - apart from radial myocardial motion, look carefully at longitudinal function. Can you see how much the mitral annular plane moves during the cardiac cycle? This motion is a consequence of longitudinal myocardial shortening. To quantify longitudinal function we performed speckle-tracking echocardiography, which measures longitudinal strain. The values are high at rest and even higher during exertion.

What I could not tell you earlier

This time my first thought was right: John had no reason to be in our echo lab! His heart was completely normal although his LV was a little enlarged and its LVEF at rest was below the lower limit of normal. What is the explanation for his echo findings (and symptoms)?

John was well trained but had not yet recovered fully from an infection. At the time of the examination, his heart showed nearly all features of an "athlete’s heart": enlarged LV chamber, slightly increased LV wall thickness, and increased LV stroke volume (SV). John's heart was able to eject a lot of blood from the heart relative to the motion of the myocardium because his ventricle was larger than normal. This is why his ejection fraction was rather low. As a matter of fact, his stroke volume was so high that he could circulate enough blood with just a few beats. That's why his heart rate was low (bradycardia). The little exercise test we did unmasked the functional reserve of his heart. Below you can see the echo finding that I could not show you earlier, otherwise you would not have read my case to the end: John’s LV stroke volume at rest was of course really high! 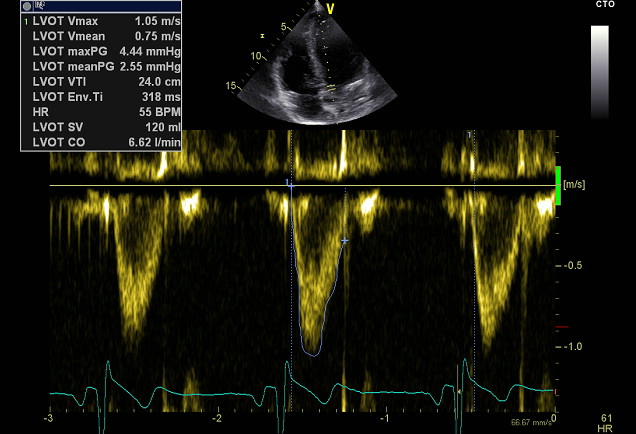 PW Doppler tracing showing the LVOT signal.
LVOT velocity and the velocity time integral (VTI),
which are used to calculate stroke volume, are high.
His cardiac output was 7 L/min at rest and increased
to 10 L/min under provocation.

What is the key message here? A subnormal ejection fraction is not unusual in athletes and does not imply cardiomyopathy, but merely indicates that the individual is well trained. One can use a simple exercise to obtain a rough estimate of functional reserve. Finally, even healthy individuals can be quite interesting to examine.