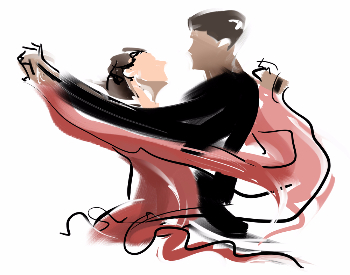 The moment was magical. Their eyes locked across the smoky dance bar. Her blue dress and brown hair caught his attention immediately. The year was 1951. The war was over and things had started to look better. He stopped dancing the tango and pulled away from his dance partner. She looked at him surprised, with wide eyes. This was not exactly per plan but I ask you ... what in life is per plan? He walked across the room to the beautiful girl, never for once breaking contact with her hazel eyes, both of them locked in a stare that promised an adventure and more.

"My name is Josef. Would you dance with me? ". "Yes, I would love to dance with you." she replied. They have now been waltzing for 63 years as husband and wife. In their youth they inaugurated eight balls together. They share a few passions: waltz, tango, and each other.
They sit opposite me, drinking Indian tea, their fingers intertwined in each other’s, glancing at each other occasionally with smiling eyes. I think to myself: is this what real love looks like?
He is hard of hearing and at times she has to speak louder to get his attention. His frequent reply is "Why are you shouting?" upon which she lowers her voice. Then the inevitable query from him, "What did you say? Speak louder". I have to suppress a smile.

It was she who first noticed that he was breathing heavily during their daily walks. He also complained of tiredness and occasional chest pain. She suggested he should see a doctor - which he obviously ignored, as most men do.
When he did decide to come in 2012, I brought him to the echo labor. Walking through the corridor made him breathless.

We made the diagnosis using the two echo views shown below. Easy indeed.

Josef’s aortic valve looked calcified and thickened; the cusps were hardly opening. We suspected relevant aortic stenosis (AS) and went on to assess its severity.

The transvalvular pressure gradient across the aortic valve is calculated from velocity information obtained with continuous-wave (CW) Doppler. We obtained the best spectral Doppler signal (with the highest aortic jet velocity) from the modified apical 5-chamber view. 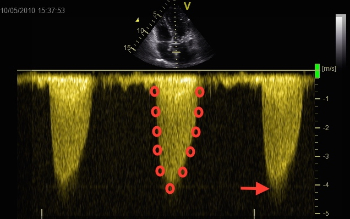 Isn’t this a perfect signal? A dense velocity curve with a clear envelope. Within the spectrum one can see the lower velocity of the outflow tract. The maximal velocity is easy to measure and there are no fuzzy linear signals at the peak of the curve. These are due to the transit time effect and should not be included in the measurements.

Here are our measurements:
- AS peak jet velocity (red arrow; >4. m/s), which corresponds to a maximal gradient of 67 mmHg.
- Mean transaortic gradient of 45 mmHg; the outer edge of the dark ‘envelope’ was traced (red dots)].

Using the continuity equation we also calculated the aortic valve area (< 0.9 cm2).
Josef had a serious problem: severe symptomatic aortic stenosis. There is only one solution: Aortic valve replacement. Josef was a good surgical candidate so we opted for surgery as opposed to a percutaneous approach.

Prof A. Kocher and I decided to operate Mr. Nowak with the INTUITY valve, a new generation aortic prosthesis. In contrast to older models it is balloon-expandable and requires fewer sutures during valve replacement.

Sutureless fixation of the valve onto a debris-free aortic annulus combines the advantages of open surgical aortic valve replacement, namely complete removal of pathological tissue, with the advantages of transcatheter techniques (i.e. facility and rapidity). Shortening the aortic cross-clamp and extracorporeal circulation (ECC) time may help to reduce mortality and morbidity. And this valve also promises to be effective in the long run, leading to clinically significant reductions in aortic valve mean pressure gradients and left ventricular size over 4 years of follow-up. A perfect operation. The patient left the OR in stable hemodynamic and respiratory condition.

Parasternal long-axis view (left) and short-axis view at the level of the
great arteries (right). The aortic valve prosthesis is in situ.
Its mobile components open freely.

We can easily distinguish its fixed components, sutured to the native aortic valve annulus, with no paravalvular leak. The mobile components are thin and move freely. The Doppler velocity is barely higher than that of a normal valve. 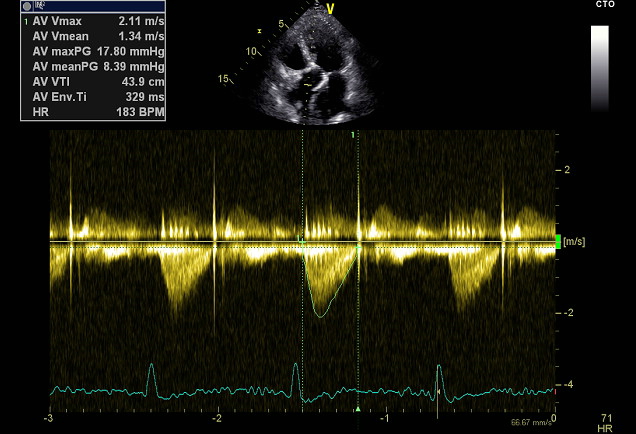 Today, two years post-surgery, Mr. Nowak decided to teach “an Indian” how to waltz – with catastrophic results, as you can see. The man deserves an NYHA I for his health and his love. Hats off to you, Sir. Let me know the secret of your success at the next follow-up.

Mr. Novak teaches me to waltz