Isn’t it interesting to see the different ways in which patients deal with their illness? I am sure you have encountered the grouchy patient, the depressive one, or the “worrisome” type. Ágnes had a different character: she retained her sense of humor although she had several medical conditions.

Ágnes is 80 years old, of Hungarian descent, and strongly attached to the Austro-Hungarian empire (1867–1914). It was a time when Austria was a major power in Europe. One of the major contributions of the Hungarians to the empire was their rich and delicious cuisine, of which Ágnes was very fond. She was sent to the echo lab with a history of aortic valve replacement, paroxysmal atrial fibrillation, hypertension, chest pain, and dyspnea. It was not difficult to spot her Hungarian dialect. I told her that I also have Hungarian ancestors. Our conversation moved on to her favorite dishes: stuffed cabbage, “paprika chicken”, and stuffed peppers. 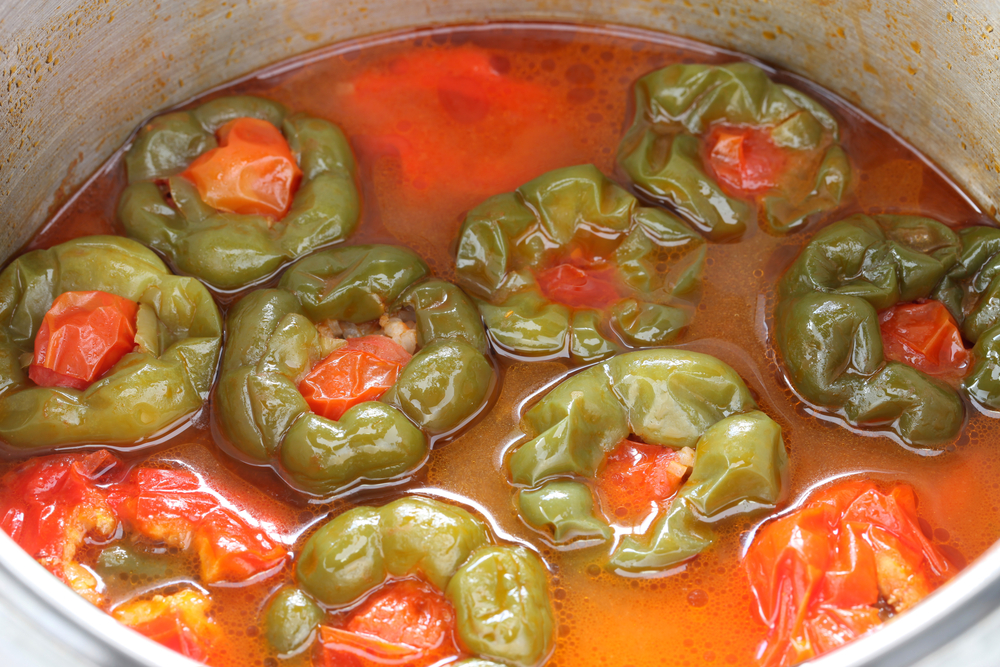 Stuffed peppers: Here is a link on how to cook the original Hungarian version.

We laughed and joked about the importance of using the best ingredients and she mentioned that peppers makes Hungarian women “hot”.

I placed the transducer on her chest and found the following:

Four-chamber view, a mass in the left atrium.

Now it's quite easy to spot the problem: there is a large mobile mass in the left atrium. The patient has mild left ventricular hypertrophy and her left atrium is slightly enlarged. Let us take a closer look at the mass:

Zoom view: does the mass come from the left atrial appendage?

Note how the mass protrudes through the mitral orifice into the left ventricle during diastole. Does it come from the left atrial appendage?

The ingredients of her problem

Ágnes was in sinus rhythm and under warfarin at the time. She had no history of malignancy and no sign of infection. After the exam I turned to Ágnes and told her that I had seen something in the heart that did not quite belong there. She merely smiled and said: Is it the paprika I just ate? That certainly made me laugh. Although stuffed peppers were definitely not what I saw in the left atrium, it still caused a problem: it prevented me from performing a TEE study right away (the patient needs to be in a fasting state for it). After all, I wanted to find out where it originated and whether other structures were present.

Peppers in the heart

The TEE study was postponed to the next day. Ágnes was still cheerful. This time she explained, in great detail, how paprika chicken is best prepared - at least until I injected midazolam and put her to sleep. Here is what the TEE study showed:

Long-axis view showing the mass protruding into the left ventricle.

Take a look at the huge finger-like mass. It appears quite smooth on the surface and fairly homogeneous. A two-chamber view helps to describe its relationship to the left atrial appendage.

The mass and its relationship to the left atrial appendage.

Three-dimensional TEE showing the true morphology of the mass.

The 3-D study provided some additional information. The mass had several “fingers” The largest one reached into the left ventricle. Doesn’t the mass truly resemble a bunch of peppers? But the 3D study confirmed that the origin of the mass was partly outside the left atrial appendage. Color Doppler was also helpful:

Color Doppler: the jet impinges on the mass.

Note how the MR jet impinges on the mass and causes it to flutter. A frightening finding in view of the fact that this definitely increases the risk of embolization.

A bitter pill to swallow

To be honest I am not sure about the benign or malignant nature of the mass. A partly dislodged left atrial appendage thrombus? A myxoma in atypical location in the left atrium? What now? Should we perform aggressive anticoagulation and take the risk of embolizing the mass? Or would you call for the surgeon and ask him to remove the mass? Do you have any other options?

Please post your opinion in the comments below. I promise I will give you the end of the story and how Ágnes is doing now.