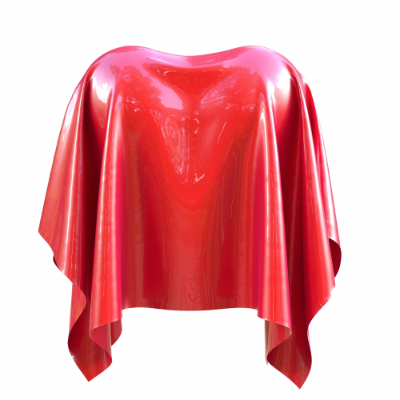 Pavol, 27 years old: a lot of plans for the future and quite bent on discovering the world. Pavol, about 40 years later: a chair, loads of pills, plenty of excess weight to lose, and unbearable symptoms to overcome. What happened in between? We still do not know, but maybe you do. And we need your help!

Pavol was admitted for the first time to the Strazhesko Institute of Cardiology in Kiev (Ukraine) when he was still young (30 years old). The reason was fatigue. The findings were anemia and hypothyroidism. The treatment: hormone replacement with L-thyroxin (regularly) plus oral iron therapy (occasionally). After that nothing spectacular happened, except that he gained weight.

When Pavol was compelled to enter the hospital again he was 62, but looked as if he were 80. He weighed 128 kg, had had a few episodes of angina pectoris, and was in heart failure NYHA functional class III. His legs were swollen, his face was pale and unemotional. For years he had avoided seeing doctors. Dr. Olena Nemchnya took care of him when he came to the hospital.

His ECG was definitely not normal. Pavol told Olena that coronary artery disease had been suspected when he was young. 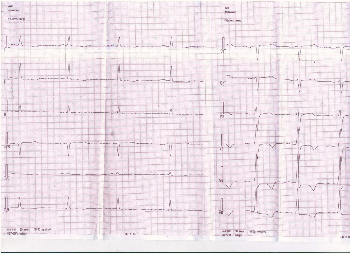 His echocardiogram also looked quite strange. Something we’ve never seen before. Take a look at his parasternal long-axis view.

Parasternal long-axis view:
a structure seen in the distal portion of the left ventricle.

Pavol’s left ventricular function was hyperdynamic and clearly something was going on in the distal portion of the heart. The parasternal short-axis view showed that the “structure” nearly obliterated the ventricle.

Parasternal short-axis view.
The mass was located at the inferior apical myocardium,
in the region of the papillary muscle.

Take a look at the apical four-chamber view. This is a pretty impressive mass.

There is a mass in Pavol’s heart. It’s not an artefact, that’s for sure. We can see it on every view, but what is it? Just an abnormally thick myocardium? Maybe apical hypertrophy? But the structure seems to be more echogenic compared to the rest of the myocardium. What in the world is it? A vegetation? But then he had no signs of infection. Could it be a thrombus? Thrombi are frequently found in the apex, but only when there are predisposing factors such as wall motion abnormalities or poor left ventricular function.
Before we discuss other options, let us take a look at the color Doppler study.

Color Doppler shows that there is flow within the mass.

Is there flow in little sinusoids that reach into the mass or maybe vessels that supply the mass? Difficult to say from the echo. A cardiac CT was performed, and showed no contrast enhancement. 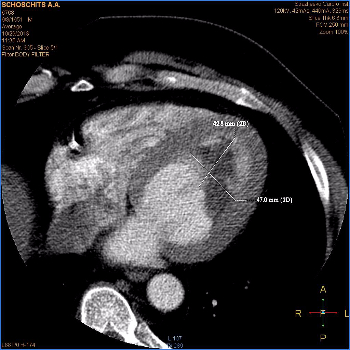 Is it a benign tumor? A fibroma or rhabdomyoma would be an option. However, these tumors are rare in adults. A biopsy would have been very useful, but Pavol declined. What about a malignant tumor? Despite the size of the mass its appearance was very homogeneous, there was no invasive growth, and no pericardial effusion. This does not quite fit with a malignancy. Even MRI did not provide a definite answer or prove that the origin was malignant. 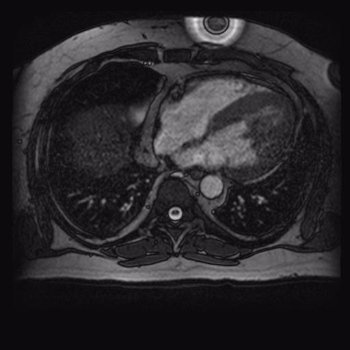 Cardiac MRI: the mass is seen at the apex.

So what other options do we have? Endomyocardial fibrosis (Löffler’s endocarditis) looks very similar. One would find eosinophilic infiltrates at the apex. But Pavol had a completely normal white blood count and normal levels of eosinophilic cells. So Löffler’s endocarditis is out of the race. Could the patient indeed have hypertrophic cardiomyopathy? The ECG would certainly be in favor of this diagnosis. Maybe it is a special variant of non-compacted myocardium? Actually when tissue Doppler of the mass was performed, it did seem as if active contraction was present there. The greater echogenicity of the mass might reflect the higher density of the compacted myocardial tissue.

Let us see how things evolved

Pavol received treatment for arterial hypertension and heart failure – aspirin, beta-blocker, ACE inhibitor, diuretics. The hormone replacement therapy was adjusted because his blood tests showed hypothyroidism. He lost about 10 kg of weight during aggressive diuretic therapy, his dyspnea decreased, and his peripheral edema almost disappeared. During this time the mass was consistent. The doctor decided to wait for a few months and see what happened.

One year later, in January 2015, Pavol was still feeling good: less weight (15 kg), less dyspnea (NYHA functional class II), but still infrequent episodes of angina pectoris. He refused to undergo a coronary angiography. What about the mass? Well, it was still there and still the same!

One-year follow-up: the mass showed no signs of progression.

What is your opinion?

Olena showed us the case when she was in Vienna during her clinical training at our hospital. We were quite stunned and discussed the case with our experts. We couldn’t really come up with a diagnosis, but maybe you can. Let us use the power of the Internet in showing what collective knowledge can do. Have you ever seen a similar case? Post your comments below. In any case send it to your colleagues. Maybe we’ve discovered a new disease entity.