Surgeons love to implant all kinds of “material” into the body: prosthetic valves, tube grafts, or pacemakers. They even implant artificial pumps. The materials developed by the medical industry are innovative and imaginative. Surgeons excel when it comes to stitching, screwing, gluing or clipping such materials into our body. However, the true hero on some occasions is not the surgeon who puts something IN, but the one who takes it OUT. Read on and find out what I mean.

Zlatko was one of the first patients to actually receive an implantable cardioverter defibrillator (ICD) in Austria: that was more than 20 years ago. Diagnosed with arrhythmogenic right heart ventricular disease (ARVD), the ICD saved his life on several occasions. Six years after implantation the RV lead broke and a new one had to be implanted. The generator was replaced twice; the last replacement was 4 years ago. Unfortunately Zlatko’s RV lead broke once again just a few months ago and he needed a new RV lead again.

With this information in mind, look at his echo. Pretty many “cables” in the heart, I would say. If you look closely you can see the three leads in the right ventricle (click on the image for video).

It all adds up

What you see here is nothing unusual. Remember: pacemakers have been implanted since the nineteen-sixties. Following the introduction of ICD and CRT systems, we have been encountering increasing numbers of pacemaker implants. Nearly a quarter million pacemakers are implanted every year in the US. In Germany, more than 900 pacemakers per million inhabitants are implanted each year. Good for the patients? Not always. Many patients are rather young when they receive a pacing device. They have to live with Dzwiresdz in their heart for several years. As a number of problems may occur and the leads may break, many patients require some form of repeat surgery. Lead dysfunction is usually resolved by inserting a new one. The old leads are disconnected or cut short. In most cases they are left in place in the heart. In other words, the number of leads in the heart may add up in the course of a lifetime.
As a matter of fact, Zlatko now has four leads (an additional one in the SVC) in the heart.

But there is more to this case than the number of leads. Can you see any other unusual features? Look at the position of the RV lead on this image loop.

Focused view, showing “the bend” in the lead and
how it sticks in the apex of the heart

The course of the lead is really awkward. It touches the free lateral wall of the RV and takes a nearly perpendicular turn towards the apical septum. It seems to stick far into the interventricular septum, possibly ending in the LV apex. The strange position is also seen on the chest X-ray. 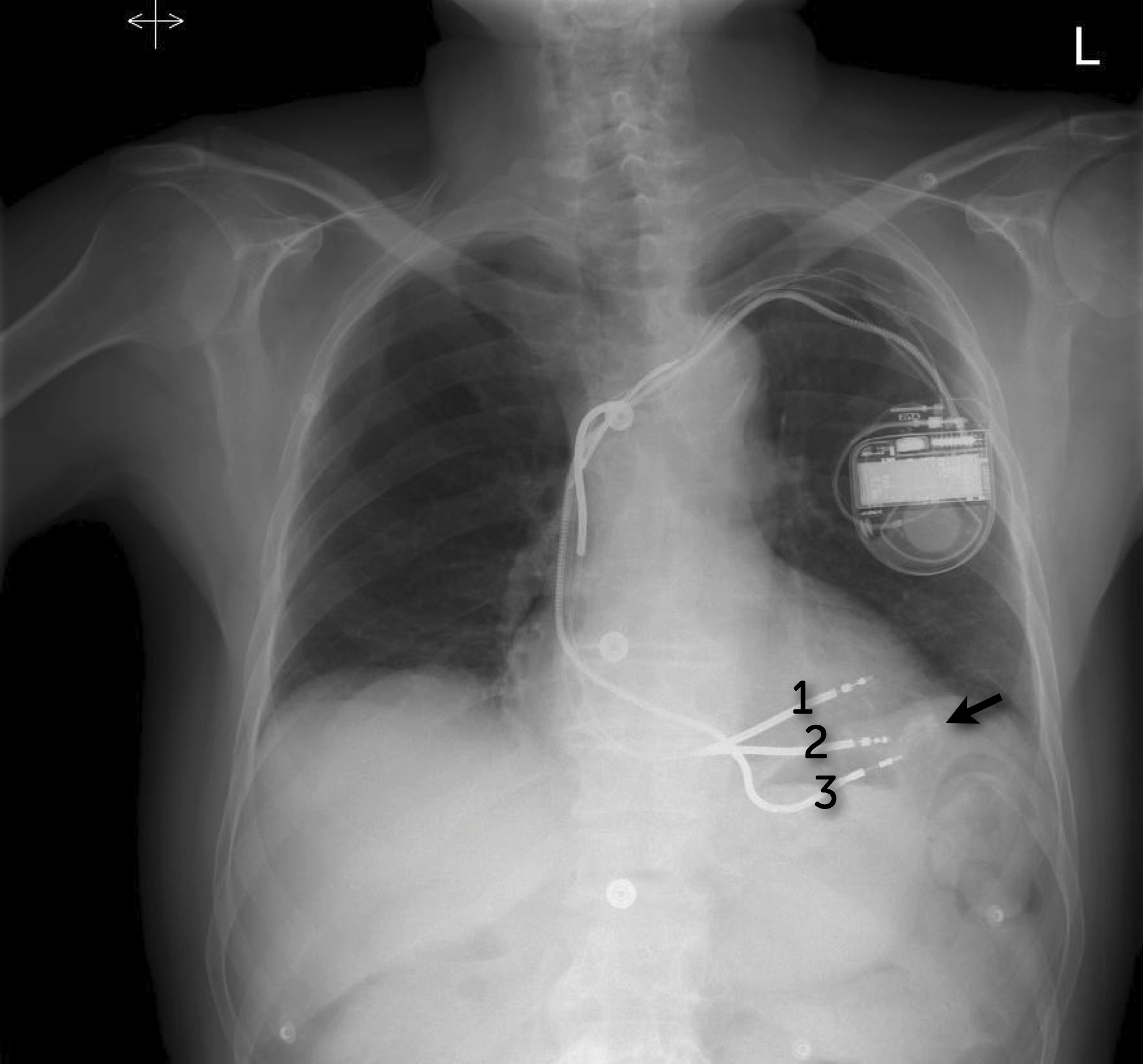 Chest X-ray showing the wires and the awkward position
of the 3rd RV lead. Note that there is fibrosis / calcification
in the region of the RV apex at the tip of the lead (arrow).

This is something I have never seen before. However, is it a problem for the patient? As it turned out, this particular lead is his oldest one – it was implanted more than 20 years ago. It was no longer active, but I had the impression that the contraction of the free RV wall was pushing the lead further into the septum. Dangerous or not, we came to the conclusion that it was necessary to extract as much of the old material as possible before implanting a new one. After all, who wants to have four ventricular pacing leads in the RV? - especially because the risk of developing renewed TR increases with every implanted lead.

This is where our surgical hero enters the stage. Extraction of leads has become a field of its own, and some are true experts in the field. One of them is Cesar Khazem, who knows all the tips and tricks of the implantation AND explantation of pacemaker leads. Using various techniques, devices, sheaths and even laser, he is able to free the leads from fibrotic material and remove them without opening the chest or the heart. Take a look at the video and see how this was done in Zlatko.

Video of the procedure: see how the leads are extracted

In this video Cesar uses a Dzlocket styletdz, which is a special type of traction device placed inside the conductor coil, along its length. Pulling on this Dzthreaddz prevents elongation of the lead during traction. In addition, a mechanical sheath is used to free the lead from the surrounding fibrotic material. In the video you can see how fluoroscopy is used to guide the procedure.

Cesar was able to extract three of the four leads. The only one that he did not dare touch was the lead that seemed to poke through the septum into the apex. On chest X-rays, CT and fluoroscopy, the tip of the probe was surrounded by dense and partly calcified tissue. We were simply scared we would cause a ventricular rupture. Zlatko was 81 years old. We believed the risk of rupture would simply outweigh the benefits of potential chronic lead perforation. Here are the extracted leads: 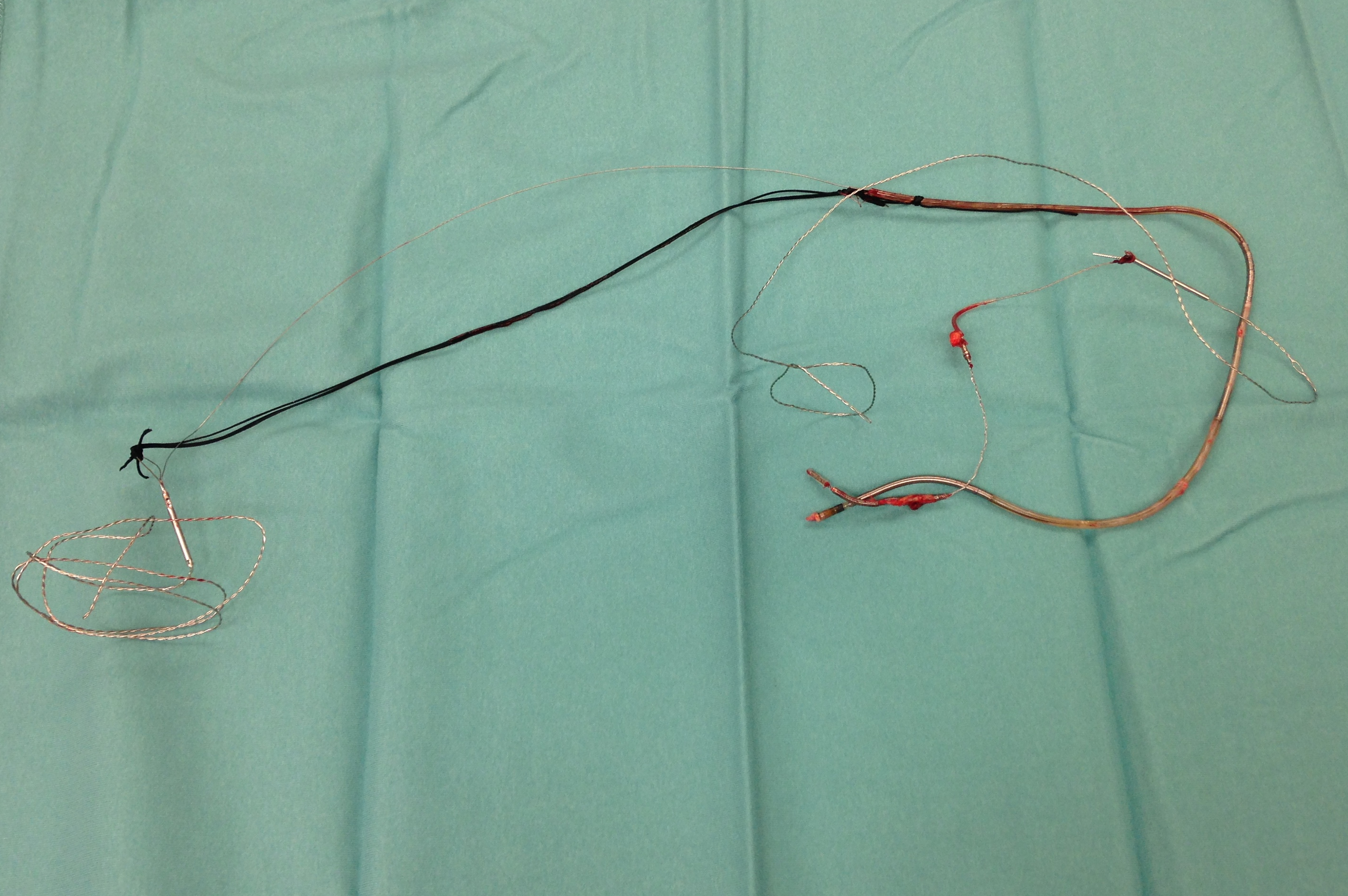 This is Cesar shortly after he had successfully implanted the new RV lead: 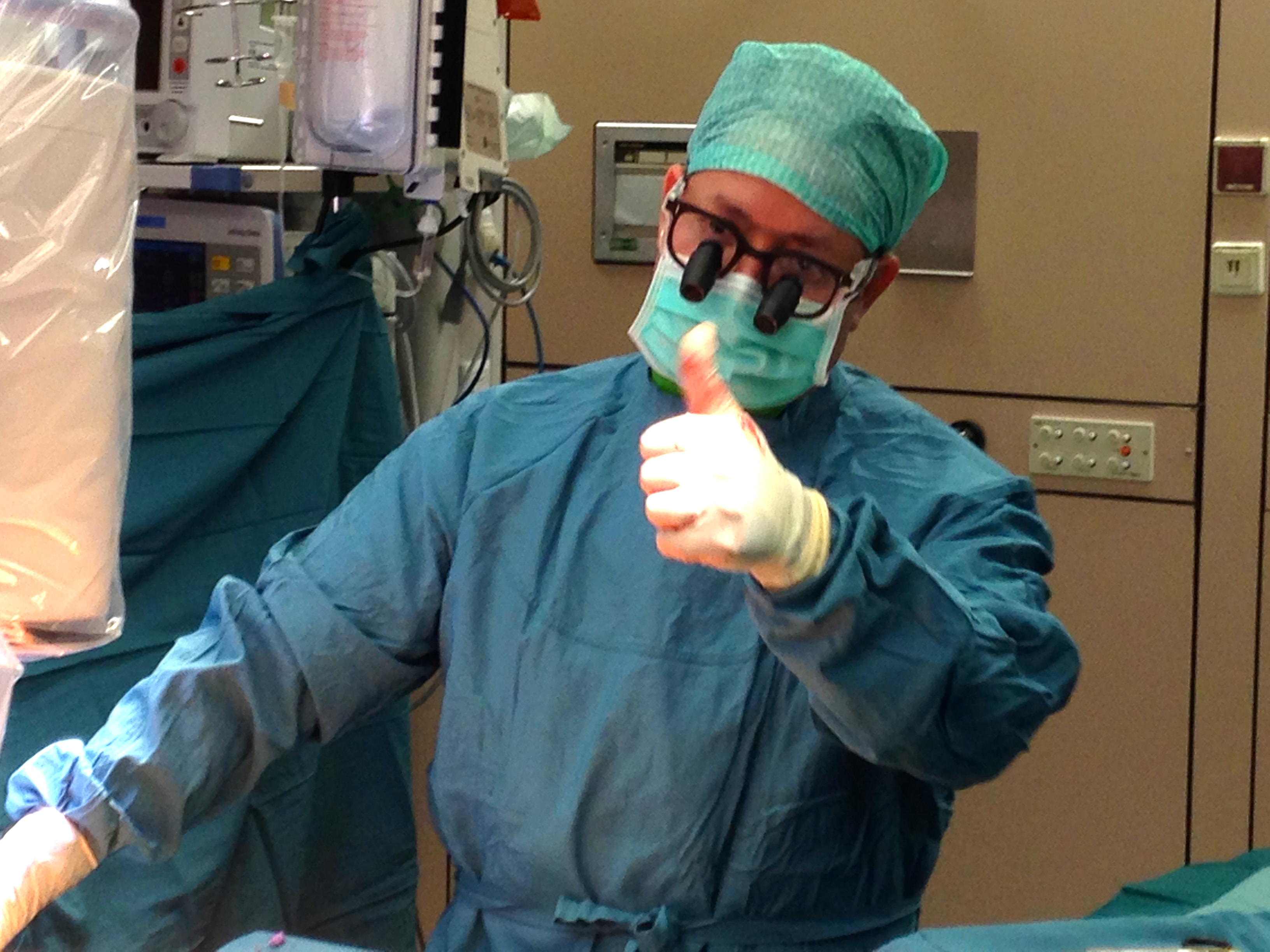 Cesar Khazen - the surgeon who did it.

The echo performed after the procedure shows only two leads in the RV. On a side note: the patient’s TR was also less

Echo after the procedure: the lead is out.